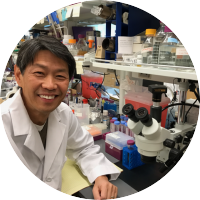 EMAIL: .(JavaScript must be enabled to view this email address)
Visit Website

HIV-1 reverse transcriptase is the most error-prone DNA polymerases among known replication DNA polymerases. Our research primarily focuses on mechanistic and structural understanding of the error-prone active site of HIV-1 RT. Other RTs with high fidelity such as MuLV RT are also studied, in order to identify molecular elements that contribute to the fidelity difference between HIV-1 and oncoretroviral RTs. For this study we employ both pre-steady and steady state kinetic analyses as well as other well established fidelity assays such as M13 lacZα forward mutation assay and gel-based misincorporation assay. Next, we also focus on the contribution of RT fidelity to HIV-1 genomic mutagenesis, evolution and escape using various virological methodologies. Finally, we recently showed that HIV-1 RT also incorporates rNTPs during DNA synthesis in macrophages, but not in T cells. The effect of rNTP incorporation on HIV-1 replication kinetics, genomic mutagenesis and cell tropism are under active investigation. Our observation has also led us to identify 3’ deoxy rN compounds a new class of anti-HIV drugs, which uniquely block HIV-1 replication in nondividing target cell types such as macrophages and microglia. This study is currently being supported by NIH R01 AI049781. Recently our study on dNTP pools in macrophages was recognized by three publications in Nature, which reported a new anti-HIV host factor, SAMDH1, and our follow-up study proving that SAMHD1 is responsible for the poor dNTP pool in macrophages was recently published in Nature Immunology (see press coverage in BBC).
Press release:
http://www.bbc.co.uk/news/health-16968795
http://www.hivandhepatitis.com/recent/2011/0201_2011_a.html
http://www.aidsmeds.com/articles/hiv_macrophage_dntp_1667_19795.shtml

(C) Enzymology and fidelity of avian influenza virus RNA polymerases: We are examining the enzymatic fidelity and mechanisms of avian and H5N1 influenza RNA polymerases, and the role of the polymerase in viral evolution and host adaptation. We are also exploring the endonuclease activity of the PA subunit of the influenza virus RNA polymerase. As part of this work, we have established the first high-throughput assay platform that uses the full length PA protein for small molecule screening and early-phase drug discovery. This project is a part of a NIH contract awarded through the NIH CEIRS network, as part of the University of Rochester’s New York Influenza Center of Excellence (NYICE; Co-PI, NIH HHSN26620077778C).
Press release:
http://www.urmc.rochester.edu/news/story/index.cfm?id=2894
http://biologybiozine.com/articles/unit-6-classification-anddiversity/scientists_uncover_mystery_of.php